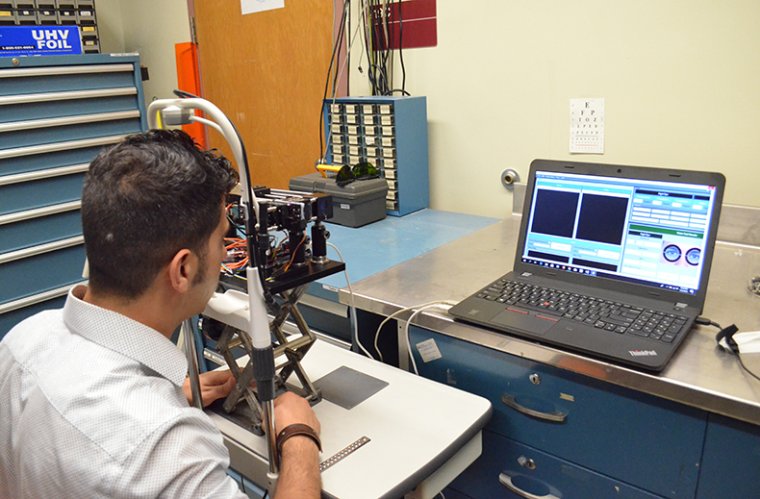 UA Researchers Develop Device to Determine Eye Prescriptions Faster, Cheaper and More Accurately
Which of these two lens options lets you see more clearly? Now, it might not matter. Researchers at the University of Arizona created a device that can produce an objective and accurate eyeglass prescription in 20 seconds without any subjective input from the patient.

The portable auto-phoropter, created by researchers at the University of Arizona College of Medicine – Phoenix and James C. Wyant College of Optical Sciences, will determine eye prescriptions faster, cheaper and more accurately.

Renowned retina surgeon Gholam Peyman, MD, a clinical professor at the UA College of Medicine – Phoenix who is best known for his invention of LASIK eye surgery, worked with Nasser Peyghambarian, PhD, and James Schweigerling, PhD, professors at the UA James C. Wyant College of Optical Sciences. They formed a startup, iCrx, to commercialize the product.

A phoropter, an instrument used to test individual lenses during an eye exam, also called a refractor, was invented in 1921. Although modified over the years with new lenses, the technology is still being used today. With more than 100 lenses on each side, the original phoropter is bulky, subjective, expensive and time-consuming to use. The new hand-held device will bring to market a smaller, faster and less expensive option that uses only three fluidic lenses that can change their focal length by pumping fluid in and out of a chamber.

Dr. Peyman added that, because the device is portable and no longer requires any subjective input from the patient, it can specifically help individuals who have difficulty speaking English, children, the elderly and those living in rural or areas outside the U.S.

In the U.S. alone, more than 8 million individuals have never seen an ophthalmologist or optometrist because they don’t have the time, they don’t have access to the specialists or because it’s too expensive. In addition, roughly 3 million need vision correction.

“That’s an incredible loss of productivity,” Dr. Peyman said. “In the world, we can imagine there are more than a billion individuals suffering from vision impairment, which can be corrected. Our device can help change this.”

The device resembles a small telescope, when placed in front of one eye and focuses on an image about 20 feet away or a near distance. While focusing on that image, the system sends an infrared light inside the eye, which is unnoticeable to the patient. The light reflects off the retina of the eye, passes through three fluidic lenses and through a telescope carrying it to the sensor. If the light reflected off the retina comes back distorted, the sensor will detect it and instruct a small pump to increase or decrease the fluid in the lenses until the sensor sees the light in the proper format without distortion. The process takes less than 20 seconds, but during this time, the system evaluates hundreds of options until the right correction is achieved.

“The standard method in place is very subjective,” Dr. Peyman said. “The current process requires a patient to differentiate between the first and second image, which is not easy for anyone, especially children or the elderly. This device will take away the guessing for both the patient and provider.”

“Human eye can differentiate much better than what glasses currently on the market can provide,” Dr. Peyman said. “If we can measure the refractive error down to the fraction, we can make lenses more accurate than what is already out there.”

Dr. Peyman said he doesn’t see any limitations when moving the technology forward to improve the lives of his patients. He hopes that “this technology will bring more precise results and hopefully everyone will benefit from it.”

The product was recently backed by Tucson’s UAVenture Capital to develop the technology and advance it through the U.S. Food and Drug Administration approval process.