Dr. Herbst-Kralovetz Working in Her Lab

Researchers at the University of Arizona have completed a first-of-its-kind study that could aid in the treatment, diagnosis and prevention of cervical cancer by identifying cervicovaginal metabolic signatures, or “fingerprints,” that distinguish patients with HPV, pre-cancerous cervical conditions and cancer.

The study, “Deciphering the complex interplay between microbiota, HPV, inflammation and cancer through cervicovaginal profiling,” was published online April 24 in EBioMedicine. This is the first report on cervicovaginal metabolomes in HPV-associated precancerous cervical conditions and cancer that demonstrates the predictive value of metabolic fingerprinting in abnormal cell metabolism. The study identified 475 metabolites in cervicovaginal samples that changed across progression of disease, resulting in unique metabolic fingerprints.

The metabolome is the collection of biochemicals, or metabolites, present in cells, tissues or body fluids, whereas metabolites are the individual molecules that make up the metabolome. Levels of these metabolites often change in response to disease. Metabolomics is the comprehensive study of the metabolome that has the potential to profoundly impact science and medical practice.

“This exciting study is a wonderful example of how scientific research and scientific breakthroughs directly impact the care of the cancer patient,” William Cance, MD, deputy director of the UA Cancer Center said. “Dr. Herbst-Kralovetz, also a researcher at the UA Cancer Center, and her colleagues have employed novel biologic analysis to identify new metabolic fingerprints that could be leveraged for the development of novel diagnostics, interventions or therapies for cervical cancer in the future.”

The fingerprints identified in the study helped distinguish HPV-infected individuals, women with precancerous conditions and cervical cancer from women who were HPV negative.

“Metabolic fingerprinting has the potential to be used for the development of future diagnostics, preventatives or treatments for cervical cancer to enhance women’s health outcomes here in Arizona and beyond,” said Dr. Herbst-Kralovetz, who also is director of the Women’s Health Microbiome Initiative at the College of Medicine – Phoenix. “Doing so could aid in reducing mortality to the fourth-leading cause of cancer in women.”

Results of the study will allow researchers to better understand risk factors, determine who is at a higher risk for developing cervical cancer and lead to larger clinical trials.

Women diagnosed with invasive cervical cancer, compared to those who were HPV negative, were highly associated with genital inflammation and a higher vaginal pH. In precancerous groups, researchers observed how microbial communities influenced amino acid and nucleotide metabolisms, which are building blocks of cells.

A novel aspect of their analysis revealed how specific metabolites were associated with different vaginal bacterial communities, as well as levels of genital inflammation. An increase in the health-associated Lactobacillus correlated with high levels of anti-inflammatory nucleotides. Collectively, they revealed that specific features (HPV infection, genital inflammation and vaginal bacteria) of the reproductive tract’s microenvironment profoundly impact cervicovaginal metabolomes. 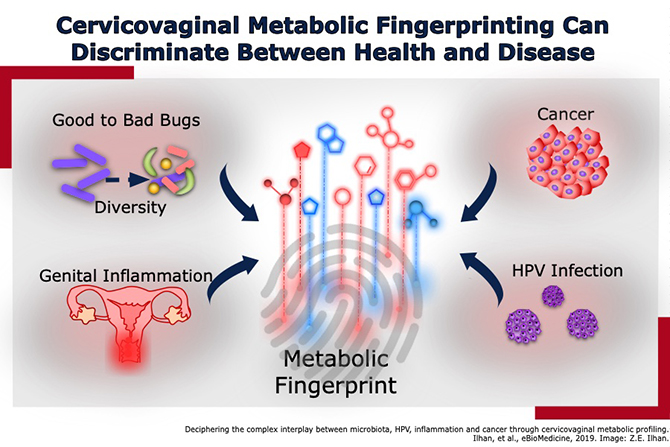 “Cervical cancer is a devastating disease, especially in rural areas and developing countries,” said Jennifer Barton, PhD, director of the UA BIO5 Institute. “Dr. Herbst-Kralovetz’s exciting findings could lead to a simple, rapid diagnostic test that will help women get the treatment they need. Additionally, this metabolic fingerprint could be used to monitor treatment or assess the efficacy of prevention methods.”

Dr. Barton added that Dr. Herbst-Kralovetz is “outstanding at bringing together interdisciplinary teams to take on complex problems. In this study, she has harnessed two emerging technologies — metabolomics and informatics — to advance our understanding of cervical disease and create positive impact on women’s health.”

Virtually all cervical cancers are caused by HPV, or human papillomavirus, a common sexually transmitted infection that nearly every sexually active person catches. According to the Centers for Disease Control and Prevention (CDC), about 24,400 HPV-associated cancers occur in women each year.

HPV is thought to be responsible for 90 percent of cervical cancers, according to the CDC. To prevent cervical cancer, Dr. Herbst-Kralovetz recommends getting the HPV vaccine and regularly go in for cervical cancer screenings and annual well-woman exams.

“Our ultimate goal is to integrate the clinical and molecular data to identify patients at risk for progressing to cancer to pinpoint potential targets for prevention or for tracking disease progression,” Dr. Herbst-Kralovetz said.

The research was made possible through the financial support of the Banner Foundation in Obstetrics and Gynecology and from the Flinn Foundation Grant No. 1974.

Dr. Herbst-Kralovetz said they plan to expand the study to a larger population in Arizona, adding the team has ongoing studies to investigate the relationship of genital microbiota to other gynecologic cancers, including endometrial cancer.