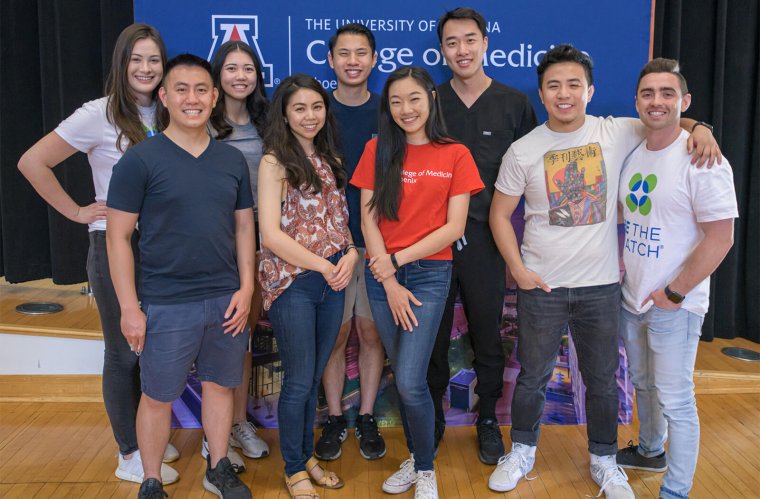 Members of APAMSA pose together

In celebration of Asian American Pacific Islander (AAPI) month, the University of Arizona College of Medicine — Phoenix’s chapter of the Asian/Pacific American Medical Student Association (APAMSA) hosted an event to honor the cultural heritage of AAPI people and to educate others on certain challenges and disparities of Asian Americans.

Lyndon Bui, a first-year medical student at the college and co-president of APAMSA, said he wanted to help create a function focused on promoting Asian culture to the campus.

“I think that I had the most growth when I really engaged with my culture and learned about how my history plays into how my parents act and how that plays into who I am,” Bui said. “Being able to be in touch with our culture helps us take a step back and see the bigger picture of the role we play as physicians.”

The event featured an origami table, a free acupuncture demo, cultural foods and drinks, as well as presentations about Asian American history and information about Hepatitis B. Also included was a speech by Be the Match to promote bone marrow donation registration.

On a national level, APAMSA collaborates with Be the Match, an organization that seeks to lower the disparities of bone marrow transplants between different ethnicities.

Alex Brown is the bone marrow co-chair of APAMSA and first heard of the organization through Bui, who he is also roommates with. He got involved with the organization because he saw the potential to make an impact.

“For this event, originally, we were going to do the bone marrow event separately, but it happened to fall in [AAPI month],” Brown said. “So, we were like ‘let’s put it all together in one event.’”

According to Be the Match, Asian or Pacific Islanders have the second-lowest odds of finding a bone marrow match based on ethnic backgrounds, with only 47% of those being able to find a match.

Matches are more likely among people of the same ethnicity; and Be the Match and APAMSA want to add ethnic diversity to the registry to increase patients’ odds of finding a match.

Bui said he hoped the event would help destigmatize bone marrow donation and educate those to feel more comfortable about the topic.

“The biggest barrier to getting people on the registry is the misinformation of being too hard, too difficult, too painful, but it’s not that bad,” Bui said. “It’s really accessible, really not as involved as an organ transplant.”

Many students from different years and backgrounds attended the event. Among those students was Haley Kenner, who said she enjoyed several aspects of the celebration.

“It was nice to have a bunch of little events in one,” Kenner said. “I felt it was a really good chance to learn about the heritage and have everybody here together.”

Kevin Vo, another co-president of APAMSA, said he considered the celebration a success and enjoyed the effort everyone put in to organize it.

“It was great to work on a team and to actually be able to celebrate our heritage with a lot of my classmates and faculty,” Vo said. “For me, [AAPI month] means celebrating my culture, my food and the roots where I come from, but also being able to share that with my colleagues and friends.”