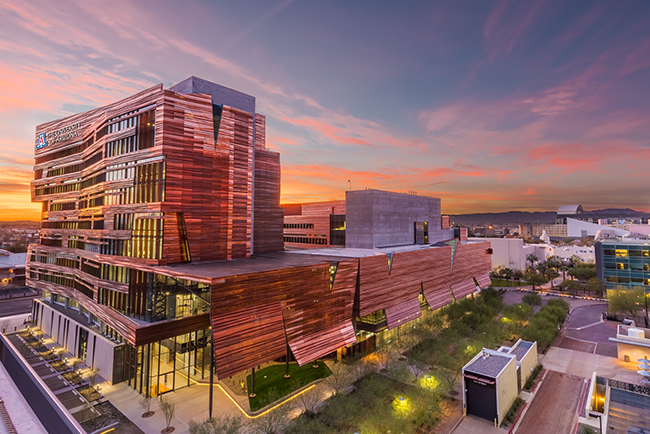 After nearly two years of construction, the sparkling copper Biomedical Sciences Partnership Building — whose grand opening Feb. 23 was part of an anniversary celebration for the UA Health Sciences — now brings scientists and researchers together to discover innovative solutions to today’s most pressing health issues.

The 10-story, 245,000-square-foot building is the latest addition to the growing downtown Phoenix Biomedical Campus. Part of the University of Arizona College of Medicine – Phoenix, it is adjacent to the college’s award-winning Health Sciences Education Building and connected through a walkway labeled the "Grand Canyon."

President Hart reminisced that when she arrived on the Phoenix campus five years ago, there was a parking lot where the research building now stands.

“There was a master plan that said there would be a building here,” she said. “But no one had approved what would be in it or how to pay for it. The progress that we’ve made in thinking about the development of the College of Medicine – Phoenix and our partnerships here, the ability across the university to impose on ourselves the kind of fiscal discipline that is necessary to develop the integrated, academic and financial strategic plan, and then to have the cooperation of so many partners, to five years later opening this building, it’s just really tremendous.”

Mayor Stanton said this “magnificent building is a major milestone for our biomedical campus.”

“We knew more than a decade ago that an investment in biosciences would pay off handsomely in downtown for the citizens of Phoenix, the citizens of Maricopa County, the state of Arizona, and because of the medical advances, people all over the world,” he said. “It would help advance an innovation-based economy that we are working so hard to build in our community.”

With the opening of the Biomedical Sciences Partnership Building, “we and the University of Arizona are one step further to creating a truly world class, cutting-edge bioscience hub in the heart of our downtown,” Mayor Stanton said.

When we say ‘Never Settle’ and talk about the academic aspirations of the University of Arizona, this is what we mean, said President Hart.

“We expect this state-of-the-art facility to catapult our research into a new dimension,” Dean Ramos said. “We are so proud of this new, beautiful building and look forward with great anticipation the medical breakthroughs that will come from research conducted here.”

The first tenants in the $136 million structure are:

The UA has invested nearly $450 million in building projects on the downtown Phoenix Biomedical Campus and has built close to one million square feet of capital projects. In addition to the College of Medicine, the campus offers classes in the UA Colleges of Nursing, Pharmacy, Public Health and Eller College of Management.

The building is the latest development in the steady expansion of the downtown campus and expanding academic medical center. In 2012, the Health Sciences Education Building opened, housing health education for UA and Northern Arizona University. The University of Arizona Cancer Center at Dignity Health St. Joseph’s, a 220,000-square-foot outpatient and research facility, opened in 2015.

DPR Construction • Sundt Construction, Inc., a joint venture, managed construction of the new building. Architects for the project are CO Architects of Los Angeles and Ayres Saint Gross of Phoenix.

The medical school in Phoenix has graduated 273 physicians and has 332 students in training in its continuing mission to address the physician shortage in Arizona.