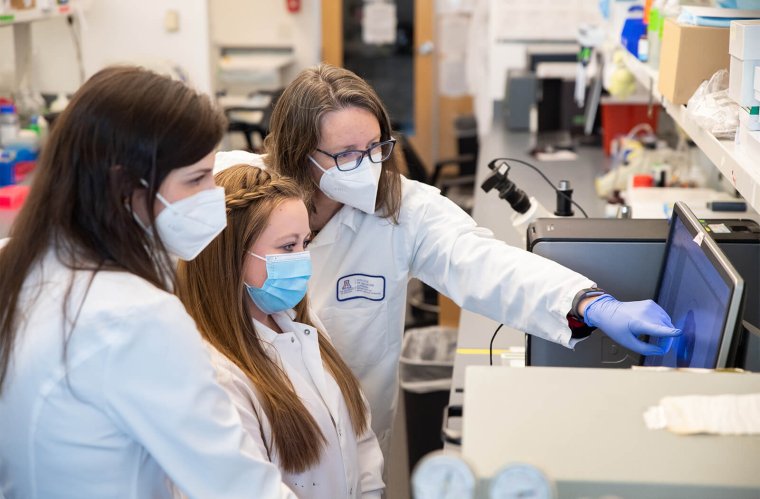 Alexandra Garvin, PhD, Dana Floyd, and Taben Hale, PhD, in the Hale Laboratory
Researchers will Study How Drug Used to Lower Blood Pressure can Change Fibroblasts to Provide Long-Lasting Protection for the Heart

Researchers at the University of Arizona College of Medicine – Phoenix have received a grant to study how medications used to treat hypertension may provide insight into novel treatments to produce long-lasting protection against heart disease.

According to the Centers for Disease Control and Prevention, heart disease is the leading cause of death for men, women, and people of most racial and ethnic groups in the United States. Heart failure affects 6.2 million Americans.

Taben Hale, PhD, is the director of the Hale Laboratory at the UArizona College of Medicine – Phoenix. She will lead the study, “Targeting Resident Cardiac Fibroblast Subpopulations for Protection Against Fibrosis,” with R01 grant funding from the National Institutes of Health (NIH).

Hypertension, also known as high blood pressure, is a major risk factor for development of heart failure. Hypertension stimulates activation of cardiac fibroblasts (CFs) — cells which play a primary role in regulating the production of the extracellular matrix (ECM) — a large network of proteins that helps cells attach to and communicate with each other.

Prolonged activation of CFs due to hypertension stimulates production of growth factors and signaling molecules in these cells, resulting in excessive ECM production. This leads to the development of fibrosis and impairs the heart’s ability to effectively pump blood to the rest of the body.

Fibrosis is a common end-stage characterization of nearly every type of heart disease. Although there are no approved treatments for cardiac fibrosis, angiotensin-converting enzyme inhibition (ACE inhibitor) medications limit CF activation.

Earlier research led by Hale showed the benefits of ACE inhibitors on CFs persisted even after stopping treatment. In hearts treated with ACE inhibitors, characteristics of the CFs rendered them resistant to the remodeling that leads to fibrosis. After the treatment was stopped, the CFs retained the memory of the drug treatment. The findings show it is possible to provide long-lasting protection for the heart.

The new study will reveal the mechanisms by which CFs can be shifted to a lower activation state. By limiting CFs’ activation, researchers hope to identify methods to protect against future fibrosis. Researchers seek to determine how changes in the regulation of specific CF genes create a relatively stable phenotype that is less prone to activation.

Researchers hope the new study may contribute to the development of medications that target cardiac fibroblasts to prevent the cardiac remodeling which leads to heart failure.