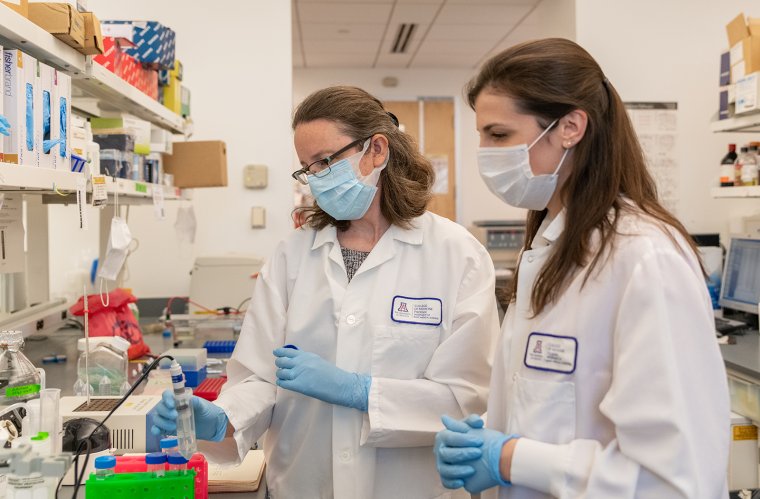 Researchers are trying to better understand the sex differences of one of the primary causes of disability worldwide, the co-occurrence of major depression and cardiovascular disease. Major depression is common in people who suffer a major cardiac event, affecting up to 40 percent of such patients, according to studies.

A collaborative research award examining this between Massachusetts General Hospital, Harvard School of Public Health, Colorado State University and the University of Arizona College of Medicine – Phoenix received an $8 million specialized center grant for research on sex differences (SCORE) from the National Institutes of Health (NIH) Office for Research on Women’s Health and the National Institute of Mental Health. About $1 million is earmarked for research to be conducted at the UArizona College of Medicine – Phoenix.

Taben Hale, PhD, an associate professor in the Department of Basic Medical Sciences at the College of Medicine – Phoenix, is a co-investigator on the project, which is led by co-principal investigators Jill Goldstein, PhD, a professor of psychiatry and medicine and executive director of the Innovation Center on Sex Differences in Medicine at Massachusetts General Hospital and Harvard Medical School, and Robert Handa, PhD, a professor in Biomedical Sciences at Colorado State University and the UArizona College of Medicine – Phoenix.

“Heart disease is the leading cause of death in women — many of whom also have unrecognized or untreated major depressive disorder, or MDD,” Dr. Hale said. “MDD is among the top two, along with heart disease, primary causes of disability worldwide, and women have twice the risk of the co-occurrence of MDD with cardiovascular disease compared to men. Identifying a novel therapeutic strategy for these conditions would have significant impact on both lifespan and quality of life. These studies are focusing on changes that may be occurring during fetal development that may set the stage for future disease in adulthood. Understanding the long-term consequences of prenatal stress is particularly important right now given the increased stress that everyone is experiencing.”

The NIH grant will fund three integrated studies that include:

The first two projects will be performed at Massachusetts General Hospital under the leadership of Dr. Goldstein, Ronald Garcia, MD, PhD, and Vitaly Napadow, PhD. The third project is directed by Dr. Handa, and the work will be performed at Colorado State University and UArizona College of Medicine – Phoenix in the laboratory of Dr. Hale.

The specific work at UArizona is to evaluate the impact of prenatal stress on regulation of blood pressure and heart rate, as well as behavioral function. Assessments will evaluate the impact of prenatal glucocorticoid exposure on behaviors that are suggestive of anxiety and depression. Glucocorticoids, including cortisol, are hormones that are increased in response to stress. UArizona researchers also will evaluate the potential therapeutic efficacy of transcutaneous vagal nerve stimulation — involving regular, mild pulses of electrical energy sent to the brain via a branch of the vagus nerve accessible in the outer ear — to reverse these effects.

“The scientific mission of this SCORE grant is to identify abnormalities, beginning in fetal development, that have shared consequences for sex differences in brain circuitry regulating mood, lifelong recurrence of MDD, hormonal imbalance, immune responses to stress, and autonomic and neurovascular dysfunction in early midlife and target these abnormalities using a novel neuromodulation technique,” Dr. Goldstein said. “The goal of this SCORE is to enhance our understanding of sex on MDD and translate this knowledge into sex-selective treatment strategies.”

According to researchers, MDD is associated with abnormalities in the stress response areas of the brain. These brain regions also regulate the autonomic nervous system, which is involved in the short-term regulation of blood pressure and heart rate. Dysregulation of the autonomic nervous system is associated with cardiovascular disease. In fact, women are at twice the risk for the co-occurrence of MDD, autonomic dysregulation and heart disease, leading to a 3-5-fold risk of death in women from heart disease, often with unrecognized and untreated MDD.

“This funding is critical to perform studies to advance our knowledge of the relationships between disorders of the brain and the heart, and to identify novel treatment strategies to specifically target cardiovascular disease and MDD,” Dr. Hale said.

Grant Number: NIH U54 MH118919. The Innovation Center on Sex Differences in Medicine at Massachusetts General Hospital is the primary site under Dr. Goldstein’s leadership. The total costs awarded are $8,130,603, with $1,005,425 awarded to Dr. Hale’s team.