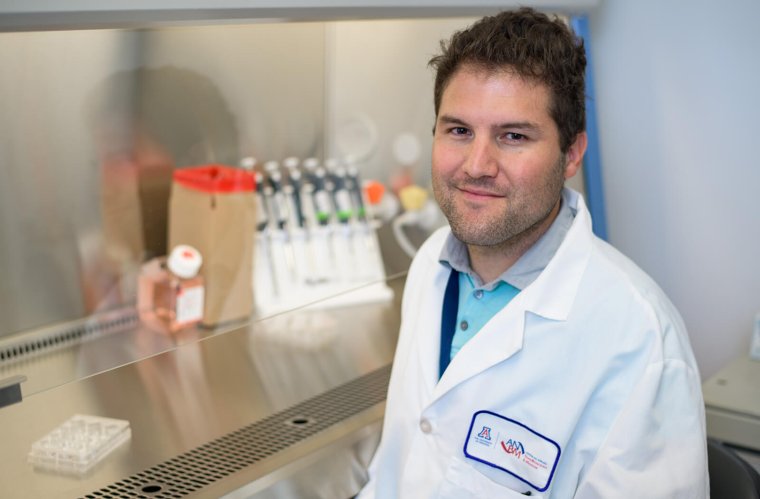 Jerome Lacombe, PhD, in the Center for Applied NanoBioscience and Medicine Lab

Searching for the Perfect Radiosensitizer

Radiosensitizers increase the effectiveness of radiation in cancer treatment, and can lower the amount of radiation necessary to treat a tumor. A team of researchers from the Center for Applied NanoBioscience and Medicine (ANBM) at the University of Arizona College of Medicine – Phoenix have characterized withanolide D as a potential new natural candidate drug that’s found in the roots and leaves of the plant withania somnifera.

About half of cancer patients receive radiation therapy as part of their treatment. Researchers have tried for many years to improve the therapy’s efficiency by minimizing normal tissue toxicity while maximizing tumor control.

“The main goal of radiation treatment is to find the right balance,” Dr. Lacombe said. “You want to kill the tumor but you don’t want to damage the normal cells.”

Previous researchers have studied another withanolide, withaferin A, the first to have been isolated, and found that its properties slow the proliferation of cancer cells. Studies have shown that it also has antioxidant properties. When used in combination with ionizing radiation, withaferin A can enhance their effects, meaning the radiation dose can be decreased with the same results as a higher dose of radiation.

“Withanolides enhance the effect of the radiation, which means that for a smaller dose of radiation, you still kill the tumor while preventing damage on the surrounding normal cells,” he said.

The results are important because one of the biggest challenges in radiobiology and radiation oncology is finding the perfect radiosensitizer, Dr. Lacombe said.

“Scientists are looking for different ways to improve the therapeutic ratio. We have new technology that can better target tumors but no tissue or organs around it,” he said. “Another approach is to find a pharmaceutical approach where a drug can radiosensitize the tumor so you can reduce the radiation dose. As a result, you reduce the damage to the normal cells.”

The next step for the researchers is to assess the effect of withanolide D on normal cells and in more complex models such as organ-on-chip or animal models. “The withanolide family comprises hundreds of compounds and it would be interesting to screen additional molecules that could be even more promising than withanolide D,” Dr. Lacombe said. The team was comprised of Titouan Cretignier and Laetitia Meli, graduate students in the School of Pharmaceutical Sciences at the University of Geneva in Geneva, Switzerland, Leslie Gunatilaka, PhD, professor, and Kithsiri Wijeratne, PhD, assistant research scientist, at the University of Arizona School of Natural Resources and the Environment.

The pharmacy students’ involvement was part of a student exchange program between ANBM in Phoenix and the University of Geneva. This international graduate program is coordinated by ANBM professor and director Frederic Zenhausern, PhD, MBA, in Arizona with colleagues Muriel Cuendet, PhD, and Jean-Luc Veuthey, PhD, at the School of Pharmaceutical Sciences in Geneva, Switzerland. The research was funded in part with a grant from Colleen’s Dream Foundation. The foundation is the largest, privately funded ovarian cancer-specific nonprofit in Arizona.

Dr. Lacombe studies the effect of radiation treatment or space radiation on human organs and develops platform technologies to investigate the biochemical and biophysical response of complex cellular environments to ionizing radiation.