With a shovel of dirt, construction began Thursday on the 10-story Biomedical Sciences Partnership Building, the latest development in downtown Phoenix.

University of Arizona President Ann Weaver Hart and Phoenix Mayor Greg Stanton tilled the soil, ceremoniously marking the beginning of the 2-year design and construction for the 245,000-square foot research building on the Phoenix Biomedical Campus.

“This building will foster collaborations with scientists that will lead to more cures, better treatments and bring more federal and private dollars to the state,” said President Hart. “We will pursue expanded partnerships with industry that we hope will lead to groundbreaking discoveries in the areas of neuroscience, cardiovascular and thoracic science. This building will allow us to further these efforts and, ultimately, improve lives."

As announced earlier this year by the university and the City of Phoenix, plans are in place to construct the 10-story, 245,000-square-foot research building just north of the Health Sciences Education Building on the downtown campus. 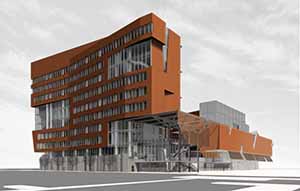 “This building will serve the medical school and beyond with important research and faculty to teach the next generation of health professionals,” Stanton said. “Of course, this just adds to the economic vibrancy of downtown. The research facility initially will bring construction jobs, and then high-paying, research-related jobs, including specialized technicians and other support staff for faculty and scientists.”

The 2-year construction on the $136 million building is expected to translate into nearly 500 jobs initially and another 360 permanent jobs at build out.

"The Biomedical Sciences Partnership Building represents yet another milestone as the city and the university develop a major academic medical center in downtown Phoenix," said Stuart D. Flynn, MD, dean of the University of Arizona College of Medicine – Phoenix. "Research in this building, in collaboration with our partners, will advance health care for all and expand our role as an economic driver for the city, valley, and state."

The building is the latest development in the steady expansion of the downtown Phoenix Biomedical Campus and expanding academic medical center. In 2012, the award-winning Health Sciences Education Building opened, housing health education for both the UA and Northern Arizona University. Construction continues on the University of Arizona Cancer Center at Dignity Health St. Joseph’s. The cancer center, a 220,000-square foot outpatient and research facility opened in 2015.

The Phoenix Biomedical Campus plays host to four UA health science colleges – the Mel and Enid Zuckerman College of Public Health, as well as the colleges of nursing and pharmacy. Also on campus are three NAU programs – physician’s assistant, physical therapy and occupational therapy as part of the university’s College of Health and Human Services. Arizona State University’s School of Nutrition and Health Innovation is housed in the Arizona Biomedical Collaborative 1 building just southwest of the education building and immediately south of the Translational Genomic Research Institute (TGen).

The funding for the Biomedical Sciences Partnership Building comes from the Stimulus Plan for Economic and Educational Development bonds approved by the legislature in 2008 that paid for construction of the Health Sciences Education Building and related campus improvements. Research focus areas include: neurosciences, health care outcomes, cancer and precision medicine.