Tuesday, June 30, 2020
Faculty were recognized for their hard work and dedication through a virtual awards ceremony...

Frederic Zenhausern is a pioneer, but he works in the future.

He’s a research scientist, but his success depends on his business acumen.

His connections to the local community are vital, but his biggest successes are with global communities. 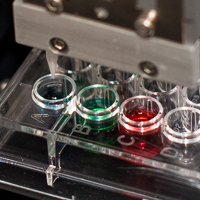 As director of the University of Arizona’s Center for Applied NanoBioscience and Medicine, Zenhausern, PhD, MBA, directs a dozen researchers to create platforms that can translate molecular analysis into medical uses for better diagnoses and treatment of diseases.

In his world, there are no borders.

Zenhausern, who was born in Switzerland and earned his BS and PhD from the University of Geneva, uses his many international connections to attract business to the Center. He also is a professor in Basic Medical Sciences at the College of Medicine.

The heart of the Center’s work is developing platforms to analyze molecules that carry genetic instructions to the body. At the Center’s state-of-the-art facilities, scientists build devices on a micro- and nano-scale for academic, clinical and industrial users. Electrical and processing engineers on staff create circuit board prototypes, electronic assembly bioassay kits and plastic devices. The team of biologists provide molecular biology research and assay chemistries development.

The Center will relocate soon, to the Biomedical Sciences Partnership Building in downtown Phoenix on the College of Medicine campus. The 245,000-square-foot research building will be the new hub for health care and scientific innovation when it opens in early 2017.

Joan Koerber-Walker, president and CEO of the Arizona Bioindustry Association, said the Center “provides a nexus between bioscience leaders of today and health care leaders of tomorrow by providing access to technology, innovation and the skills that will be necessary to make life better for the people of Arizona today and in the future.”

Researchers at the Center have many irons in the fire, but their successful international projects, which have resulted in a multitude of patents and peer-reviewed publications, include: 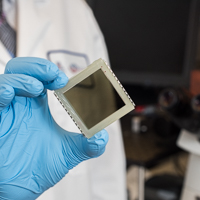 It also gives the Center’s work broader exposure to the scientific world. He considers worldwide access to medical and scientific information as a way to “develop technologies that will improve the health care system, provide more precise treatments and ultimately improve people’s quality of life.”

As a scientist with an MBA, Zenhausern is always looking to find ways to capitalize on his Center’s breakthroughs. His lab is not only involved in building platforms and technologies for diagnostic tests, but Zenhausern sees business opportunities in the way a specimen is transported from a person to a lab. His researchers have developed packaging that begins processing a specimen — such as blood, saliva or urine — while it is being shipped for analysis.

“Our office works with Dr. Zenhausern regularly to evaluate the market and patent landscape for these discoveries,” he said. “We’re collaborating with him on protecting his inventions and developing commercial pathways for them.”

Because of his business background — he earned his MBA from Rutgers University — and past entrepreneurial experience with the creation of four successful startups, Zenhausern knew to recover the intellectual properties and patents relating to the DNA test his Center developed after the UK government closed a forensic lab that was using the test. He established a new company, Whitespace Enterprise Corp., to expand the reach of the rapid molecular analysis to other systems suitable for the early detection of infectious diseases and other point-of-care diagnostics. 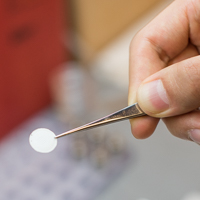 “We developed the core platform and invented the full integration of the workflow process for rapid DNA analysis,” he said. “Now we can use it for a number of other applications” such as RNA, protein or metabolomics analyses.

The projects the Center decides to take on must be sponsored through direct financing from corporate or government grants and contracts, licensing, philanthropic donations or in-kind contributions. The scope and price of its projects range from three to six months and about $50,000, to 10 years and more than $40 million for joint development partnerships. Staff scientists, faculty and students are participating in these projects, providing hands-on training and education to many young research investigators.

After a project is finished, depending on the contract, the device, kit or processing technique is retained by the University of Arizona, licensed by a corporate sponsor or accessible by the U.S. government. Some technologies have been transferred to the partner or company for validation, then mass produced for commercial distribution.