Tuesday, January 31, 2023
Exploring how the MET protein impacts the aging brain and its susceptibility to Alzheimer’s... 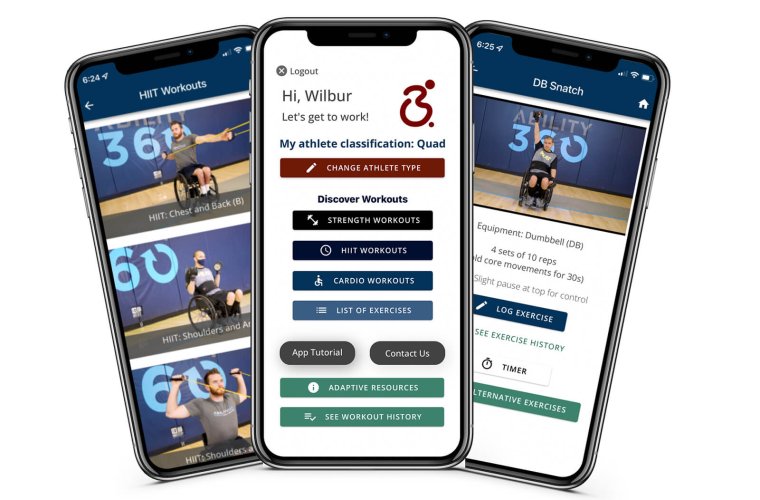 No Limits Mobile is free on the Apple App Store and is usable on the iPhone platform
Ben Conner designed the app to benefit paraplegic and quadriplegic athletes
Adaptive sports channel the competitive nature of athletes with disabilities. Through his research, Ben Conner, an MD/PhD student at the University of Arizona College of Medicine – Phoenix, knew there was an absence of software that could better accommodate these athletes, specifically those in wheelchairs, with convenient access to workouts and therapies.

“I did some research and saw there were almost zero apps specifically designed for people who use wheelchairs,” Conner said.

He'd first encountered this need while conducting other biomechanics research for his PhD and through his interactions with people at Ability 360, a 501 (c)(3) nonprofit organization run by people with disabilities, for people with disabilities to address needs and barriers within the community. Ability 360’s model of tailoring exercises to their specific patrons was invaluable. It was a resource Conner felt should be more widely available.

One question remained: How could he develop such a resource?

The answer came in early 2021 when Tech Launch Arizona (TLA), in collaboration with UArizona Research, Innovation and Impact and Arizona FORGE, unveiled its Impact Software/App Challenge.

The purpose of TLA is to commercialize University of Arizona inventions for public good. The challenge was no different. Offering $150,000 in potential funding, the group hoped to engage students in innovation and entrepreneurship.

Conner leapt at this opportunity to design a solution. His proposal — which was accepted — eventually became the No Limits Mobile app. And with the funding he received from TLA, he got to work, employing a low coding software to build the interface of the app himself.

For the content, he coordinated with Sharon Moskowitz, the strength and conditioning coach for the U.S. Paralympic Rugby team, as well as Ability 360 to create an encyclopedia of exercises and how to properly perform them.

He had adaptive athletes model the exercises, which were then filmed by a videographer at a variety of angles. The workouts were even scaffolded to further accommodate overall ability and level of disability. “The way it's broken up right now, and this is at the recommendation of Sharon and just how she approaches training, is that it's para-athletes and then quad athletes,” Conner explained. “So, either two limbs are affected, or all four limbs are affected. That helps because the exercises are then demonstrated by either a para- or a quad athlete.”

Through the app, users can track their overall progress, note the amount of weight they used, set a timer to monitor their tasks or find alternative exercises should they not have the necessary equipment for an exercise they selected. It even allows users to customize how they’d like structure their routine by employing full workouts by category — such as Strength, Cardio and High Intensity.

As Conner collects more data, he hopes to flesh out the app’s functionality. “A feature that we're building right now is adaptive resources. So, we surveyed some of the adaptive athletes on what they specifically use to exercise — things like straps that help them hold on to dumbbells, if they have decreased grip strength, padding that they'll put on their legs or something that helps hold their core up if they have decreased core strength,” he said. As more users join, that list will continue to grow.

Moskowitz, who worked closely with Conner to create the exercises for No Limits Mobile, saw that this was a void that needed to be filled, as current archives of these sorts of workouts were not very deep.

With that in mind, she used her extensive knowledge of fitness for wheelchair users to help Conner design drills that could accommodate the average athlete, as well as how expansive they could make it. “The selections of workouts, movements, form and function ultimately came down to being able to mirror seated athlete movements with the hope of widely expanding into differently abled populations in the future,” Moskowitz said.

She added, “The actual workout design goal was to create full training options for the athletes we could represent — i.e. push, pull, carry, stability, balance, muscular strength and aerobic endurance.”

As the use of the app expands, Conner hopes it will be a valuable resource for not only individual users, but also rehab centers and physical therapists.

No Limits Mobile is free on the Apple App Store and is usable on the iPhone platform. The TLA IMPACT Software/App Challenge, organized by Tech Launch Arizona with the support of Arizona FORGE, is an idea-stage competitive challenge open to UArizona teams to propose and develop solutions to real-world problems. The program is an opportunity to partner with the university to take novel ideas to the next level where they can create real-world impact.