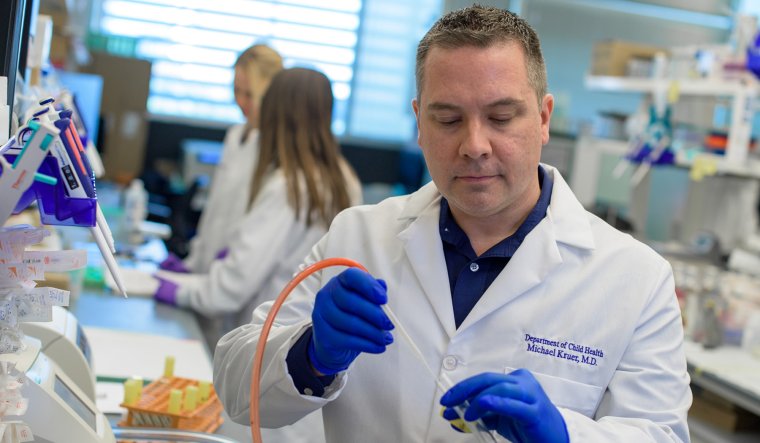 Michael Kruer, MD
International Study Will Allow Physicians to Identify Genetic Cause of Cerebral Palsy for Many

A new study provides the first strong statistical and laboratory evidence that a large proportion of cerebral palsy cases are caused by mutations in a single gene. These findings will directly inform clinical care by improving physicians’ ability to identify the cause of an individual’s cerebral palsy, which will provide closure for families, guide preventive health care and can even alter the course of treatment.

The study, directed by Michael Kruer, MD, an associate professor of Child Health, Neurology and Cellular and Molecular Medicine at the University of Arizona College of Medicine – Phoenix and director of the Cerebral Palsy and Pediatric Movement Disorders Program at Barrow Neurological Institute at Phoenix Children's Hospital, featured more than 70 collaborators who came together from institutions across the globe. These included researchers at Phoenix Children’s Hospital, Washington University, Yale University, Rockefeller University, the University of Adelaide in South Australia, the University of Gothenburg in Sweden and many others. Findings were published on Sept. 28 in Nature Genetics.

Cerebral palsy (CP) is a core neurodevelopmental disorder that affects an estimated 1 in 250 children. Historically, medical experts have known that CP occurs due to factors such as prematurity, an infection or a lack of oxygen to the developing brain. However, as many as one-third of people with CP may not have these risk factors. For many of these individuals, their CP may be due to a genetic mutation.

UArizona College of Medicine – Phoenix postdoctoral fellow Sara Lewis, PhD, one of the study’s lead authors, emphasized that the team’s findings represent a shift in how scientists think about CP. “Studies like this are creating new opportunities for how cerebral palsy can be studied and understood. Long term, we hope this can improve patient treatment and lead to the development of new interventions.”

Senior author Dr. Kruer, who is chair of the International Cerebral Palsy Genomics Consortium, coordinated the study as part of an ongoing worldwide collaboration.

Researchers performed whole exome sequencing in 250 parent-offspring trios from centers in the U.S., China and Australia. The study discovered that 14 percent of the cases in their cohort could be attributed to genetic mutations. Dr. Kruer said that this was a conservative estimation, and the number may be higher. In comparison, lack of oxygen at birth is currently estimated to account for about 10 percent of CP cases.

Through this research, scientists found a strong signal for de novo mutations. These spontaneous changes in DNA are not found in either mother or father, but arise shortly before or after conception. This explains why most families have just one child with CP, yet genetics play an important role.

“Our data indicates there are likely to be hundreds of different genes that may lead to CP when a mutation develops within them,” Dr. Kruer said. “Instead of mapping to inflammation and blood clotting as most research with CP has focused on, these genes indicate that fundamental changes in early brain development (the way neurons form intricate webs or circuits with one another) are important as well.”

Somayeh Bakhtiari, PhD, another of the study’s lead authors and postdoctoral fellow at the UArizona College of Medicine – Phoenix, said “the study identified several genes in CP patients that were previously implicated in other neurodevelopmental disorders such as epilepsy, intellectual disability and autism. This overlap mirrors what is seen clinically and epidemiologically, indicating connections between different disorders of development.”

The paper also reported the discovery of two new genes that lead to CP when they carry mutations, RHOB and FBXO31, and also implicated several dozen additional genes that await final confirmation.

"I had a nagging sense that we were missing something years ago in regards to our understanding of CP, and that if we could better understand causes, we could develop better treatments. These findings provide a foundation for that work,” Dr. Kruer said.

Dr. Lewis added that these findings open up new research directions. “As a result of these studies, we have developed new animal models of genetic CP and are keenly interested in common pathways that seem to be affected, altering brain development.”

Experiments in the paper included studies of fruit flies with mutations in the same genes found in the human patients. “The fly studies tell us that finding cerebral palsy genes is more than a hypothetical exercise — altering these genes can change how organisms move,” said Lewis.

Dr. Kruer said that in genetic studies, there is power in numbers. They are partnering with patients, families and cerebral palsy centers of excellence through the Cerebral Palsy Research Network to do a follow-up study. International collaborations through the International Cerebral Palsy Genomics Consortium will also serve as a powerful resource for future research.

“We believe this is only the start of what we will be able to uncover, and genetics is just the beginning,” Dr. Kruer said. “There is an awful lot of neurobiology to understand and many challenges that we’ll encounter in trying to improve the lives of people with CP, but now at least we have a roadmap.”