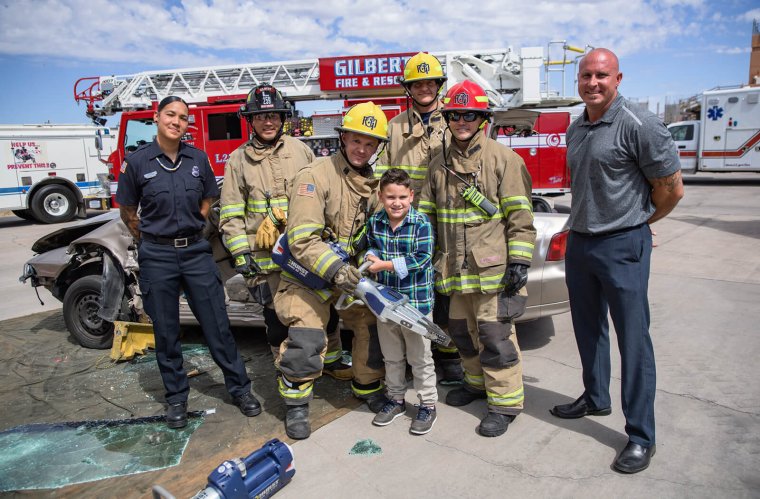 Simulated crash training crews with Glendale Fire paramedic Alex Matthews (left), her son, Jamison (holding jaws-of-life device), and Mesa and Gilbert Fire crews. Alex and Jamison were in a motor vehicle accident in December 2012, where Alex used the EPIC-TBI prehospital care guidelines to help save the life of her son.

Simulated crash training crews with Glendale Fire paramedic Alex Matthews (left), her son, Jamison (holding jaws-of-life device), and Mesa and Gilbert Fire crews. Alex and Jamison were in a motor vehicle accident in December 2012, where Alex used the EPIC-TBI prehospital care guidelines to help save the life of her son.
A University of Arizona Health Sciences-led study of prehospital care guidelines for emergency medical services providers treating traumatic brain injury (TBI) among children found deaths from severe TBI can be nearly eliminated if the guidelines are implemented by first responders.

The study, EPIC4Kids, is a follow-up to the larger all-ages Excellence in Prehospital Injury Care (EPIC) TBI study that showed that adjusted odds of survival doubled for severe head injury victims and tripled among those who were intubated using the guidelines.

Out of 2,801 pediatric cases, no deaths occurred for those categorized as severe TBI when the guidelines were followed, said Joshua B. Gaither, MD, an associate professor and Emergency Medical Services (EMS) Fellowship director in the Department of Emergency Medicine at the UArizona College of Medicine – Tucson and lead author on the paper that was published in the Annals of Emergency Medicine.

“For those kids with severe head injury, the adjusted odds of survival were 8.4 times higher after we started this,” said Dr. Gaither, who is an Arizona Emergency Medicine Research Center (AEMRC) member and Tucson Fire Department medical director.

Read how Glendale Fire paramedic Alex Matthews’ EPIC initiative training helped save her son’s life after they were involved in a traffic accident.

“Dr. Gaither’s work as part of the statewide AEMRC is a big milestone in the fight against traumatic brain injury,” said Samuel M. Keim, MD, professor and chair of the Department of Emergency Medicine, AEMRC director and a coauthor on the paper. “Because this work was with children, the future economic impact of improving outcomes is huge.”

According to the U.S. Centers for Disease Control and Prevention, the burden of TBIs includes about 2.9 million emergency department (ED) hospital visits in the United States a year and nearly 57,000 deaths. Among children, TBIs result in 837,000 ED visits and more than 2,500 deaths per year, making it the leading cause of pediatric death and disability.

EPIC4Kids study cases were drawn from Arizona State Trauma Registry data from the Arizona Department of Health Services and were scored based on severity – moderate, severe and critical. For the severe TBI group – the largest at 2,001 cases – the survival rate to hospital discharge increased to 100% after the implementation of the prehospital care guidelines.

The TBI guidelines, first introduced in 2007, focus on hypoxia, hypotension and hyperventilation – the “three H bombs” to avoid when treating head injury. All three cause a lack of oxygen or blood flow to the brain: the first involves low oxygen saturation in the blood; the second low blood pressure; and the third constriction of the arteries due to a carbon dioxide drop in the blood caused when an EMS provider squeezes a breathing bag on a patient faster than necessary.

To prevent hypoxia, EMS providers are taught to administer high-flow oxygen to patients right away. To prevent hypotension, they’re also taught to administer intravenous fluids quickly. To prevent hyperventilation, many EMS agencies now use special, flow-controlled breathing bags with a timing light as a visual cue for the proper rate. That rate, Dr. Gaither pointed out, varies from 20 squeezes per minute (every 3 seconds) for those age 14 and younger to 10 squeezes per minute (every 6 seconds) for older children and adults.

Daniel W. Spaite, MD, a professor and the Virginia Piper Distinguished Chair of Emergency Medicine and AEMRC associate director at the UArizona College of Medicine – Phoenix, said more than 11,000 Arizona paramedics and emergency medical technicians (EMTs) have been trained in the TBI treatment guidelines since 2012. This is important because less than a half-hour of prehospital treatment before hospital arrival is the most critical for TBI patient survival.

“To think that, on average, the first 26 minutes of six-and-a-half days of medical care improved adjusted odds of survival by more than 700% in severe head trauma – it shows how quickly the neuron, the brain cell, dies. If you don’t do it right early – if you deliver a dead brain cell to the hospital– it doesn’t matter how good the neurosurgeon is, they’re not going to get it back. So it’s really remarkable,” said Dr. Spaite, who is the medical director for the City of Mesa Fire and Medical Department and co-principal investigator on the EPIC and EPIC4Kids studies.

Dr. Gaither underscored a need for regular reviews of head injury cases with first responders by EMS medical directors to reinforce that the guidelines, which cost little or nothing to implement, are followed.

“There’s absolutely no reason why any EMT or paramedic couldn’t implement these standards of care,” he said. “But getting our providers to focus on these truly critical interventions requires weekly feedback to ensure they’re implementing these strategies. That type of quality-improvement initiative is what will make a difference in communities across the country.”

If the EPIC-TBI treatment guidelines were implemented across the U.S., thousands of brain injury deaths among children could be prevented, Dr. Spaite said. To that end, he and Dr. Gaither are planning a nationwide study on TBIs to leverage the findings of the EPIC and EPIC4Kids studies.

The story originally appeared on University of Arizona Health Sciences' website and was written by David Mogollon.