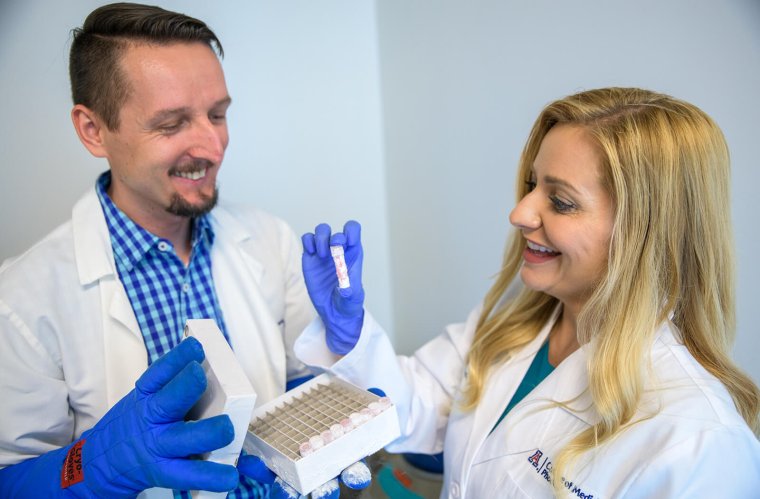 Researchers at the University of Arizona College of Medicine – Phoenix conducted a comprehensive review on gynecologic cancer and the microbiome, in an effort to increase the understanding and research for new interventions in gynecologic cancer prevention, therapy and quality of life.

Melissa Herbst-Kralovetz, PhD, an associate professor and director of the Women’s Health Microbiome Initiative at the College of Medicine – Phoenix, and researchers in her lab, Paweł Łaniewski, PhD, and Esra Ilhan, PhD, published a review made available online Feb. 18, 2020 in Nature Reviews Urology. The article discussed the potential role of the microbiome in the development of cervical, endometrial and ovarian cancer. Additionally, they discussed the microbiome’s impact on toxicity and cancer therapies in terms of efficacy, and explored how researchers can begin to modulate the microbiome.

“What we know is that bacterial vaginosis (BV) or ‘dysbiosis’ (microbial imbalance) of the vaginal bacteria can set a woman up for poor gynecologic outcomes,” Dr. Herbst-Kralovetz said. “This includes a higher risk of sexually transmitted infections, including HPV. HPV in the context of dysbiosis is more likely to persist (meaning it is not cleared) and potentially progress to cervical cancer. For other gynecologic cancers, we don’t know yet if these ‘bad’ dysbiotic bacteria also contribute to endometrial or ovarian cancer. Studies have started to show an association, but not causation yet. No one knows how these bacteria may be functioning to influence cancer. We need more research in these areas and potentially new strategies to rid women of BV and reinstate homeostasis.”

The article included a review of gynecological cancers. A few of the main points concluded that a vaginal microbiome dominated by lactobacilli (good bacteria), benefits the host, whereas dysbiosis with anaerobes (bad bacteria) is linked to poor women’s health outcomes, including gynecologic cancer. The article also discussed that the gut microbiome can modulate estrogen levels in women and thereby may impact carcinogenesis of estrogen-mediated cancers, such as gynecologic cancer. Despite emerging evidence in this arena, researchers need well-designed, larger clinical and mechanistic studies to better understand the role of these gut and vaginal bacteria in the development, prevention and therapy of gynecologic cancer.

The review included epidemiological data that highlight the prominent work being done in the field regarding women’s health. Interestingly, women from indigenous populations around the world are more likely to have a dysbiotic vaginal microbiome, and women in certain racial and ethnic minority groups have higher rates of cervical cancer, as well as higher rates of BV. Dr. Herbst-Kralovetz said these associations were a driving factor for them and others to hypothesize that the vaginal bacteria and bacterial communities could be contributing to persistent HPV and progression to cervical cancer.

“Dr. Herbst-Kralovetz is one of the leaders in this important and emerging field,” said Joann Sweasy, PhD, interim director of the University of Arizona Cancer Center. “In combination with others in the field, Dr. Herbst-Kralovetz’s research is revealing important clues regarding the relationship between the microbiome and cancer. This research is likely to lead to a better understanding of how the microbiome promotes the development of gynecologic cancer and impacts its treatment.”

There are racial and ethnic disparities that exist related to gynecologic cancer. Epidemiological data has shown that in contrast to cervical cancer, the risk of developing ovarian cancer is 30 percent higher in non-Hispanic white women than in women in other races or ethnicities. Dr. Herbst-Kralovetz said that in the U.S., black and non-Hispanic white women have the highest incidence of endometrial cancer; however, the mortality is twice as high in black women compared to all other racial and ethnic groups. Endometrial cancer is the most common gynecologic cancer in developed countries and fourth-most common in the U.S. More research is needed on these topics related to health equity, but gynecologic cancers have the least National Cancer Institute funding and only 14 percent of the National Institutes of Health (NIH) funding goes toward women’s health.

The article was commissioned for Nature Reviews Urology after Dr. Herbst-Kralovetz spoke at the Global Health Keystone Symposia on “The Role of the Genital Tract Microbiome in Sexual and Reproductive Health” in Cape Town, South Africa in December 2018. At the meeting, she met Annette Fenner, PhD, chief editor for Nature Reviews Urology, who invited her to submit a proposal and subsequently commissioned an article in early 2019.

“I wanted to share this exciting work with a broad audience and encourage others to pursue research on the microbiome and gynecologic cancer to ensure we have high quality and robust findings to support future interventions that aim to modulate the microbiome,” Dr. Herbst-Kralovetz said. “This is a fascinating new area of research. We need more research on this topic and in women’s health in general.”