Thursday, May 28, 2020
Research to better understand susceptibility to infection and the health implications of COVID-19...

Wednesday, May 27, 2020
Katherine Giordano, a doctoral candidate at the University of Arizona College of Medicine – Phoenix, received a prestigious...... 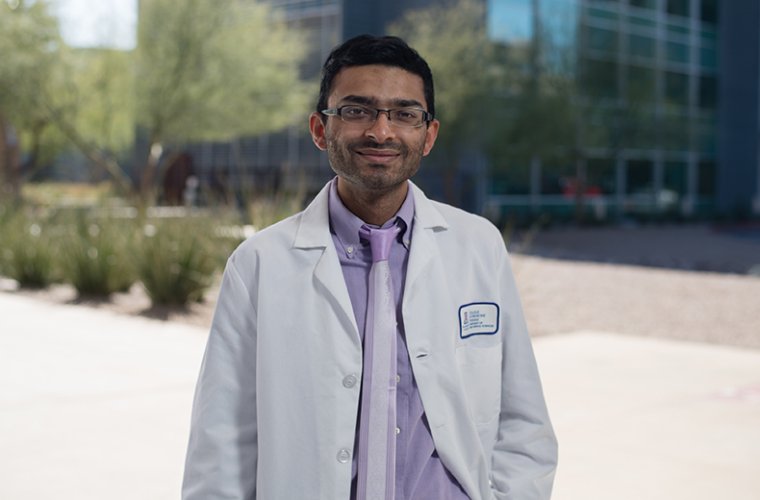 A new study that measured the reliability of administering antibiotics before obtaining blood cultures could end the debate among physicians regarding sepsis management.

Seven emergency departments across North America, including Maricopa Integrated Health System, participated in the research, published Sept. 17 in the Annals of Internal Medicine. The study revealed that initiating antibiotics immediately reduces the sensitivity of blood cultures drawn shortly after treatment. That, in turn, reduces the chances of treating and tailoring antibiotics to specific bacterial and fungal sepsis infections.

“This is a constant debate in the medical field,” said Murtaza Akhter, MD, an assistant professor in the Department of Emergency Medicine at the University of Arizona College of Medicine – Phoenix and co-author of the study.

A life-threatening infection that causes the immune system to attack the body, sepsis has a mortality rate of 20 percent. According to the Centers for Disease Control and Prevention, at least 1.7 million adults in the United States develop sepsis each year.

The cornerstone of sepsis management is early administration of an antimicrobial, which kills or inhibits the growth of microorganisms such as bacteria or fungi. However, guidelines recommend two blood cultures be drawn before starting antimicrobial therapy, resulting in significant delays and decreasing the chance of survival.

“It was unknown how quickly blood cultures lose their ability to grow organisms after antibiotic administration,” Dr. Akhter said.

“Now we know that even if blood cultures are performed very rapidly after antibiotics, they lose a significant amount of their diagnostic ability.”

Dr. Akhter, who also is an attending physician at Maricopa Integrated Health System, said the study tells physicians that blood cultures performed after antibiotics are unreliable.

“Although administering antibiotics to septic patients is important, it is imperative to get at least one blood culture before providing the treatment.”

Prior to this study, it was unknown how quickly antibiotic sensitivity changes. Some physicians thought that if you administer antibiotics shortly before blood cultures, you could still properly diagnose the “bug.” However, this study revealed that this strategy fails because the cultures are affected rapidly after antibiotic administration.

“We already knew that emergency physicians were correct to not delay antibiotics, but now we know that internal medicine doctors were also correct in that blood cultures after antibiotics are not as reliable,” Dr. Akhter said.