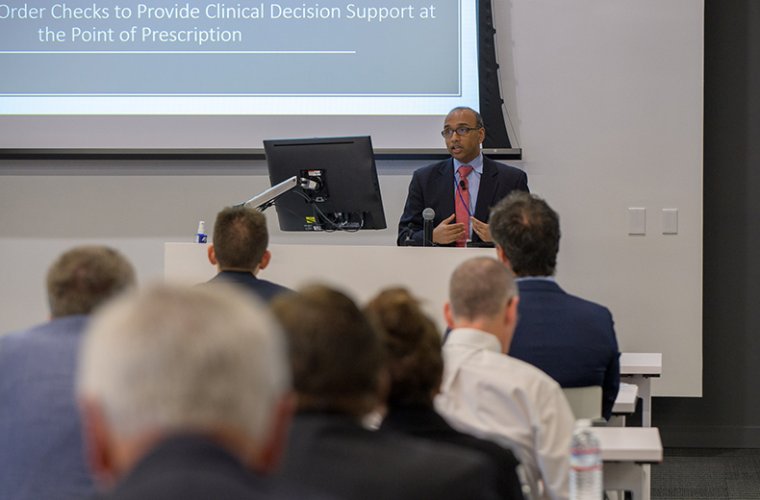 Researchers, clinicians and decision makers gathered at the University of Arizona College of Medicine – Phoenix to learn about the current trends, barriers and outcomes in precision medicine and pharmacogenomics, which is the study of genetic medicine and drug response.

The second annual Precision Medicine and Pharmacogenomics symposium, hosted by the Division of Clinical Data Analytics and Decision Support, took place on Jan. 17, 2020.

“As a clinician, the promise of pharmacogenomics is really to take an individual’s genetic material and use it to predict adverse events with medications, allow us to predict drug and dose selection and provide safer therapies that are more effective and less costly,” said Michael Fallon, MD, executive director for Clinical Research and chair of the Department of Medicine at the College of Medicine – Phoenix.

Dr. Fallon said there are challenges to implementing pharmacogenomics in practice, including cost, scalability, specific standardized testing and reporting, and providing actionable information to clinicians in real time.

Deepak Voora, MD, an associate professor of Medicine at the Center for Applied Genomics and Precision Medicine at Duke University School of Medicine, provided a keynote presentation. He discussed the implementation of a large pharmacogenomics study known as PHASeR. The program is a collaboration between the U.S. Department of Veterans Affairs and Sanford Health, a Midwest-based health care system, with the goal to improve patient treatment by using medications tailored to individual’s genes.

“The goal of pharmacogenomic testing is to improve the efficacy, reduce side effects and potentially reduce opioid exposure by using the patient’s genomic information to inform drug responses,” Dr. Voora said. “There are many prescribed medications that are impacted by pharmacogenomics for the VA population. We know that one of every two veterans will be prescribed a medication under pharmacogenomic control in a five- or six-year period. Through this novel and new collaboration with Sanford Health, we hope to test up to a quarter million veterans over the next four years and really put the VA in a leadership position in terms of precision medicine in the U.S.”

The VA Health Care System has 168 medical centers across the U.S. that care for roughly 9 million veterans. Dr. Voora mentioned a study conducted by his colleagues at the VA that sampled a population of about 7.8 million users in the pharmacy system and looked at their prescribing patterns.

“If you look at the number of patients who go on to get a new drug over that six-year period, about one-third of veterans are getting a prescription under pharmacogenomic control,” Dr. Voora said.

Currently, PHASeR is testing for patient reactions with some medications used for mental health, pain, cardiovascular disease and cancer.

“Precision medicine is really described as the future of medicine, and it involves individualizing drug therapy based on genetic variations, as well as an individual’s lifestyle and environment,” Dr. Cavallari said. “This concept of individualized therapy is not new; we have been doing this for decades, but the tools we now have are much more robust and complex.”

Dr. Cavallari said pharmacogenetics is one component to precision medicine, and it’s probably the most current component.

“We have significant evidence that certain genes are associated with drug response,” she said. “Secondly, it is much simpler than sequencing someone’s tumor. You could say that pharmacogenomics in the future will be sequencing someone’s entire genome, and that’s probably true. But right now, what we are doing and what other institutions are doing, are genotyping for those select genes that influence drug response.”

The event included seven breakout sessions that discussed the implementation of pharmacogenomics in specialties and addressed some of the challenges. Breakout sessions included:

“An event like this brings together collaborations from various partners and funding opportunities,” said Will Heise, MD, assistant professor in the Division of Clinical Data Analytics and Decision Support. “People who are interested in collaboration learn about what is going on and the possibilities in precision medicine and pharmacogenomics. It’ll be interesting to see what partnerships come out of this year’s symposium.”

The conference is one of the Division of Clinical Data Analytics and Decision Support’s many efforts to enhance research, clinical care and quality improvement at the College of Medicine – Phoenix. The division is creating software tools that advise health care providers when they prescribe medications in patients with pharmacogenetic results that an alternative drug should be used, or that a dose should be significantly adjusted.

According to Steven Curry, MD, co-director of the program, “These efforts will dramatically simplify incorporation of pharmacogenomics into regular patient care. By providing support for our efforts, The Flinn Foundation and Banner Health are advancing precision medicine and improving patient safety and outcomes.”

The symposium was sponsored by the Arizona Biomedical Research Centre and the Flinn Foundation.