Monday, December 19, 2022
The University of Arizona College of Medicine – Phoenix highlights some of our top stories from 2022... 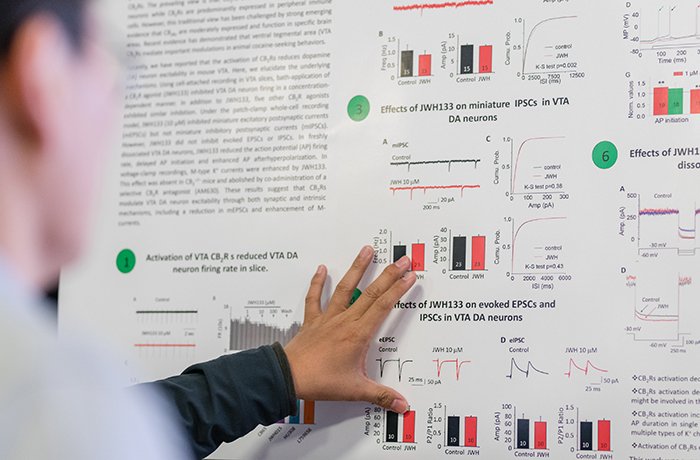 Researcher Presents Her Poster to an Attendee

The Valley Research Partnership has awarded $210,000 in grants to support collaborative research by scientists and clinicians throughout the Phoenix area.

The grants, developed by the University of Arizona College of Medicine – Phoenix and four of its clinical partners, are meant to develop cross-institutional research collaborations to enhance extramural research funding, accelerate career development and discovery and improve health care.

The program has awarded $1.59 million to 48 research projects across the Valley in four rounds of funding. Collectively, these grants have led to more than 30 publications and 28 extramural grant submissions. In the latest round, three $50,000 grants were awarded to collaborative projects for faculty principal investigators and six mentored projects for students, post-docs and residents each received $10,000.

“The Valley Research Partnership is an ongoing effort by Phoenix metro area hospitals and the College of Medicine – Phoenix to stimulate research and academic pursuit,” said Paul Boehmer, PhD, interim associate dean of research at the college. “This is a very important mechanism through which we support collaborative projects to allow those to get started, with the desire that they translate into larger extramural grants.”

Fourth-round awardees include Dong Wang, MD, PhD, an assistant professor of internal medicine at the college, and Gregory Turner, PhD, at Dignity Health, who received $50,000 to study “the novel role and underlying mechanism of corin in modulating cardiomyocyte survival after ischemic injury in heart.”

Cardiovascular disease is the leading cause of death in Arizona, affecting 4.8 percent of Arizonans in 2018. Corin is an enzyme primarily in the heart which can generate mature hormones, and subsequently regulate the salt-water balance in the body.

Based on their preliminary studies, Drs. Wang and Turner want to define the fundamental role of corin in ischemic heart disease, such as a heart attack, and to investigate how corin protects heart muscle cells from death after such an injury occurs.

“Given the current status and future expectation of heart attack in Arizona, we, from both clinical and basic research, should move forward in making advances and trying to identify new therapeutic targets and strategies for better outcomes for these patients,” Dr. Wang said. “Our study will bridge the gap in understanding the connection between corin and clinical outcomes, address a crucial question about the role of corin after cardiac ischemic injury, and reveal novel, mechanistic insights into corin’s protective effects in ischemic heart disease.”

Dr. Wang said the grant will allow the researchers to combine molecular biochemical methods with cardiac magnetic resonance imaging/positron emission tomography (MRI/PET) imaging and provide a multi-dimensional “window” to dissect events in the heart. With the support of this grant, they will generate preliminary data and they expect to pursue future funding from the National Institutes of Health.