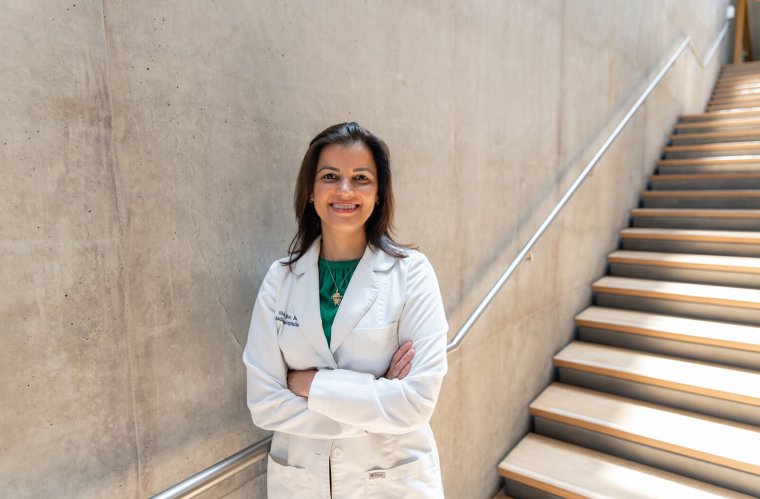 Nilda L. Franco, MD, is a clinical assistant professor of Internal Medicine at the college, as well as the division chief of Hospital Medicine at Banner – University Medical Center Phoenix.

Name someone who influenced you and why.

There were many people who influenced me. Both of my grandmothers were very strong women who raised 10 and 11 kids each. My mom, another very strong and brave woman, has influenced me tremendously. My dad died in a car accident when I was nine-years-old. My mom was left to raise me and my younger brother by herself. She then came to the United States with both of us, without a whole lot and not speaking much English, to give us a better opportunity. She taught us the value of hard work and perseverance and was always by my side, encouraging me to achieve my dream of becoming a doctor.

Tell me about a stretch goal you set for yourself and then achieved.

My current job as division chief of Hospital Medicine was never really a goal for me because it was so beyond what I had imagined for my career. Hospital Medicine is the largest division at Banner – UMC Phoenix — with over 80 physicians and APPS to care for more than 400 patients every single day. Someone thought I was the right fit for the job, and here I am in my fourth year in this role.

When I first started, the goal was to merge three very different hospitalist groups into one single Division of Hospital Medicine. I was in a unique position because not only did I do my residency here — followed by a chief resident year where I started to develop my leadership skills — but I was also the first person that had been working for about four years for two of the three groups present here at time. I also had a great relationship with all the physicians in the third group, which made it easier for many of them to stay at this hospital instead of going elsewhere.

I am not sure that I broke any barriers as far as the specialty I am working in, but I definitely have broken barriers with my current role. There are many meetings I sit in that I am the only female physician in the room surrounded by many male physicians. It is my hope that not too long from now, there are more women physicians in leadership positions sitting together in meetings with me.

There is something new to learn every single day — no matter how long we practice medicine for — and it is ok to tell patients, nurses, mentees and others when we don’t know the answer. When I was intern, one of my first attendings was Dr. Garrett, who had been in practice for more than 30 years. We had a case where we did not yet know the diagnosis. He sat on the patient’s bed and told the patient that we did not know what was going on with him yet, but we were working hard to make a diagnosis. I remember that hearing “I don’t know the answer” from someone who was so respected and had been practicing for so long. It made me feel less pressured that I had to know all the answers and the diagnosis.

Two of my mom’s brothers are doctors. When I was growing up, I remember I used to love talking to them about what it was like to be a doctor and what they had to do to get there. It helped me to know the expectations and what it would take to become a doctor.

I am mentoring medical students, residents and new attendings.