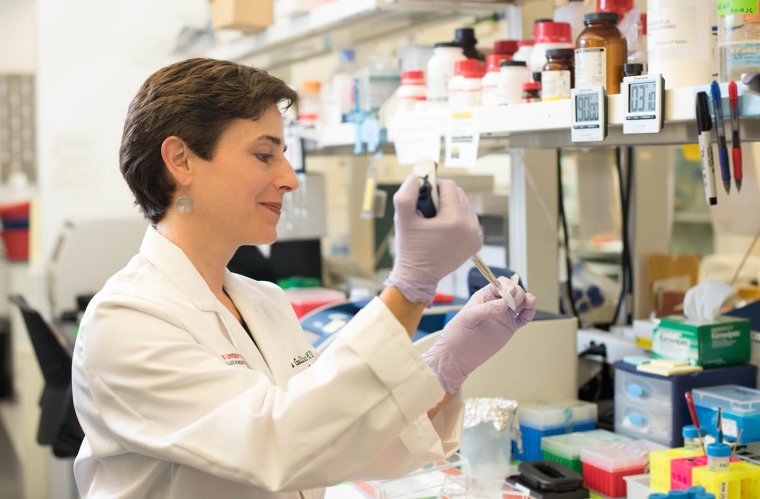 Amelia Gallitano, MD, PhD, at Work in Her Lab

Amelia Gallitano, MD, PhD, at Work in Her Lab
Dr. Gallitano is the Second Female to Achieve Tenured Professor at the College of Medicine – Phoenix

Amelia Gallitano, MD, PhD, a founding faculty member at the University of Arizona College of Medicine – Phoenix, was promoted to tenured professor. Dr. Gallitano is the second female to achieve this distinction at the college, and the first with an MD.

She currently runs a research laboratory focused on investigating how immediate-early genes, also referred to as early growth response genes, may mediate the interaction of environmental stress and genetic predisposition to influence the development of psychiatric illnesses such as schizophrenia.

Dr. Gallitano became interested in this research because she felt it was an area where there were so many unanswered questions and a great need for discovery.

“The organ system in the body that we understand the least is the brain; it’s an area in medicine that still holds so many secrets. We really have no idea what causes mental illnesses. Disorders that cause so much distress on the people that have them and their family members,” said Dr. Gallitano.

Since starting her lab at the College of Medicine – Phoenix, she has received awards from the Institute for Mental Health Research, the Arizona Biomedical Research Commission and the Sidney R. Baer Jr. Foundation. She has also received a collaborative grant from the Arizona Center for the Biology of Complex Diseases Pilot Project, as well as the National Institutes of Health R01 and R21 grants.

In addition to her already busy schedule as researcher and professor, Dr. Gallitano serves as director of the Women in Medicine and Science (WIMS) group at the medical school. Dr. Gallitano and a group of women faculty started this program three years ago to create a supportive and instructive network to promote women physicians and scientists into leadership positions, as well as to mentor others who hope to pursue careers in medicine or science.

Under Dr. Gallitano’s direction, the WIMS group has made immense progress over the last three years. The group sponsors an annual dinner, monthly socials, workshops, seminars and networking events. They hosted a symposium of national women in science leaders and have nominated numerous faculty for awards.

Dr. Gallitano received her bachelor of arts degree from the University of Chicago in 1988 with a major in behavioral sciences. She attended the University of Pennsylvania School of Medicine, graduating in 1997 with an MD and a PhD in Neuroscience. She completed residency training in Psychiatry at Columbia University and the New York State Psychiatric Institute; this was followed by a post-doctoral research fellowship at Washington University School of Medicine in St. Louis, where she was a faculty member in the Department of Psychiatry.

Her advice for those who want to work in academic medicine, “I think that the characteristic that most correlates with success is perseverance. If you really want to do this, then you can make it happen. Don’t let obstacles knock you off your track.”

Women in Medicine and Science
Faculty