Resident Life - History of the Program

The Phoenix Integrated Surgical Residency was founded in 1956 by William Kleitsch, MD, and David C. James, MD. At that time, Banner Good Samaritan Regional Medical Center (now Banner &ndash University Medical Center Phoenix) was the largest voluntary hospital in Arizona with over 400 beds. The program was originally approved for residency training of less than three years in preparation for surgical specialties.

This designation was then requested to be extended from only two years to three or four years of training. Foreign graduates and women were accepted into the program, which was not necessarily the norm at that time. Its first residents were from the University of Santo Tomas in the Philippines.

Surgery rounds used to include a one-hour midday conference, followed by rounding in-person on the patients who were presented and discussed in conference. Typically, this presentation would be of an interesting surgical or clinic patient. If none was available that week, then a common surgical patient presentation was discussed in detail. Subspecialties covered included obstetrics and gynecology, pediatrics, radiology, cardiology, general surgery, plastic proctology, ENT, urology, thoracic surgery, cardiovascular surgery, orthopedic surgery, anesthesia, medicine and pathology. There was also a Journal Club. Three hours of outpatient clinic was expected per week. It was also noted on their contracts that the residents were expected to teach interns and student nurses rotating through the services.

From the surgical case logs, you can see the breadth of general surgery procedures available. The older case logs from 1958 show the cases done by a single resident. 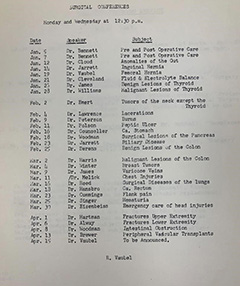 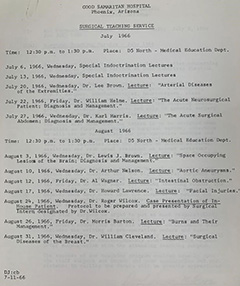 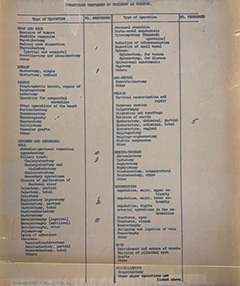 What's in a Name?

The “integrated” in Phoenix Integrated Surgical Residency comes from the fact that it needed to be integrated with a fully approved three or four year program per the American Board of Surgery. Basic science instruction was included in the resident education plan since the residency was not affiliated with a medical school or university; the program instead was affiliated with the Phoenix VA Hospital and U.S. Public Health Service Indian Hospital (PIMC) for a more diverse patient population exposure. Older patients with more malignant and chronic conditions were seen at the VA, while women, children and traumas were covered at PIMC. A committee was then formed with surgeons from all three sites to maintain close integration of the three hospitals in the residency program. Below is a letter from David C. James, MD, one of the founders, defending the integrated program. 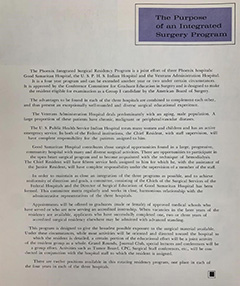 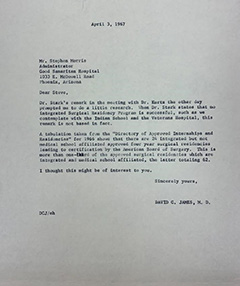 The Stone Era
Over the years, the program continued to grow to meet the needs of a growing Arizona population. Harlan Stone, MD, served as the director of the Phoenix Integrated Surgical Residency Program at Good Samaritan Hospital from 1990 to 2005. During his tenure, the program grew to train six chief residents each year, and it was ranked 16th of 262 residency programs in the United States by the American Board of Surgery.

The program developed a reputation for training strong general surgeons. Dr. Stone also supported the foundation of a new medical school in Phoenix — an idea which was originally championed by Alan Leibowitz, MD, in 1989. The University of Arizona College of Medicine – Phoenix was founded in 2007. Its campus is in downtown Phoenix and its medical students have a close relationship with the Phoenix Integrated Surgical Residency for their clerkship and sub-internship rotations.

Dr. Stone's legacy at the Phoenix Integrated Surgical Residency has resulted in the creation of the Harlan Stone Surgery Scholarship Day and the Jean and Harlan Stone, MD, Endowed Chair of Surgery.

Inaugurated in 2004, the Harlan Stone Surgery Day is a tradition to honor Dr. Harlan Stone, the legendary and beloved director of the Phoenix Integrated Surgical Residency. Dr. Stone propelled the program to national prominence as the top community-based general surgery residency in the U.S. during the 1990s. Harlan Stone Surgery Day takes place annually in June and precedes the day of graduation for the chief residents. Invited speakers are always surgeons of exceptional national and international distinction.

In 2019, for the 15th annual Harlan Stone Surgery Day, our department launched the first Scholarship Day, expanding the festivities to include poster and podium presentations by surgery residents. Thank you to our clinical and scientific collaborators for continuing to make this amazing day a success.

Past and Present Program Directors 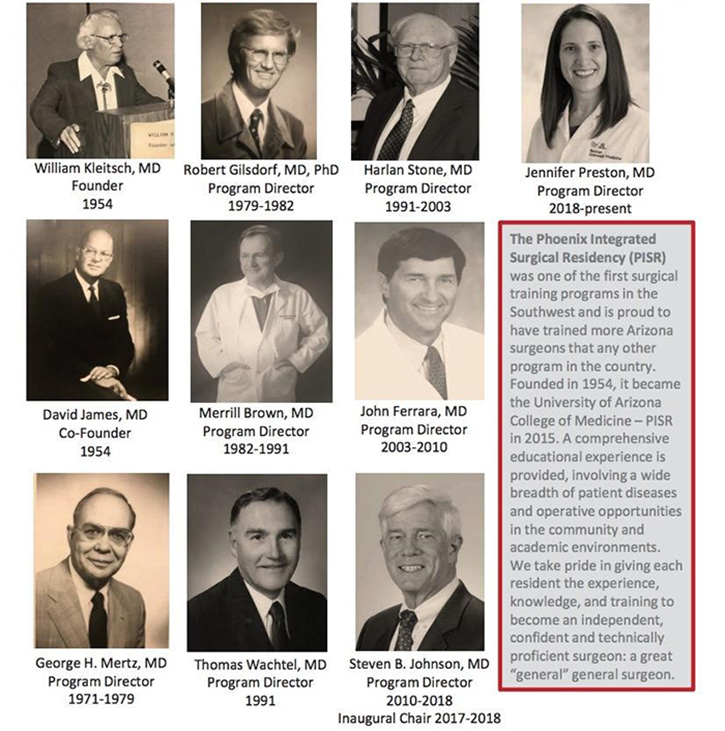