A High-Level Overview of the Process

To support the use of Banner clinical data for research purposes, a protocol entitled “Clinical Research Data Warehouse and Associated Honest Broker Processes” has been approved by the Banner IRB. The protocol details how Honest Broker staff, who are neutral intermediaries between the researcher and the electronic health record data, will take in requests for data, assess the feasibility of the requests and ultimately fulfill the requests. Requests are initiated using the research intake form.

For trainee (students, residents, fellows) requests, we provide only a list of medical record numbers in the interest of serving as many of the Banner – University Medical Center Phoenix research community members as possible.

The CRDW is an extract of clinical data from Banner Enterprise Data Warehouse stored in a structured and validated database. It is anticipated that additional data sources will be added in the future (e.g. Cancer Registry).

What data is available now in the CRDW?

What types of research data requests are covered by the CRDW?
What data elements are available for each type of data requests?

Data elements available for each data request type are summarized in the table below: 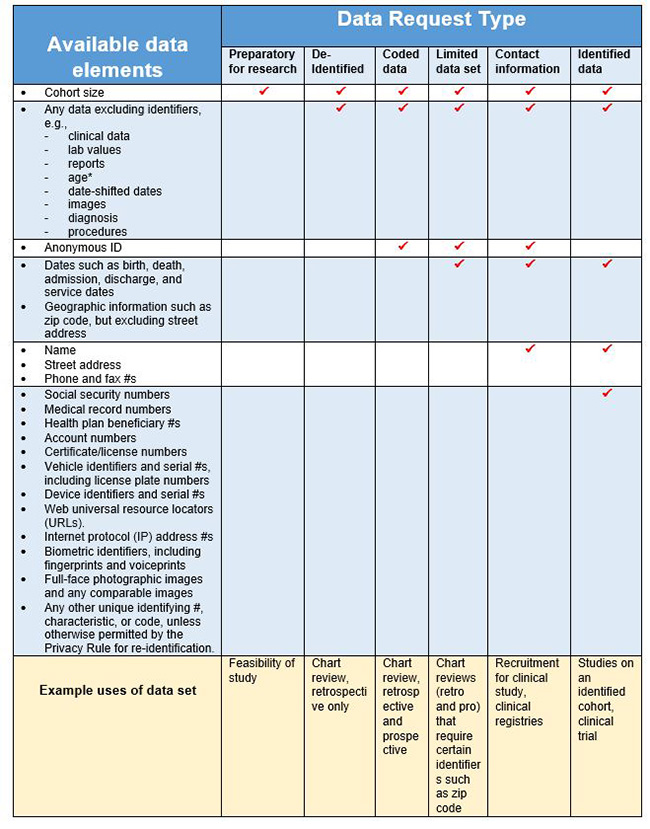 Removal of medical record number and of patient identifiers will be conducted by following the HIPAA “safe harbor” method as defined by the HIPAA Privacy Rule, (CFR 164.415 (b) (2). This method results in removing the following data elements:

In order to de-identify dates, the CRDW staff will shift all dates from the EMR 1–365 days into the past. The shift will be different across records, but constant within the records of each patient. This will allow temporal analyses such as the development of adverse effects after a drug.

The HIPAA Privacy Rule (CFR 164.514 (c) allows for the assignment of a code — referenced as anonymous ID — or other means of record identification to allow information de-identified under this section to be re-identified by the covered entity, provided that:

How long will a data request take?

This is highly dependent on the scope of the request. Upon receipt of the clinical research data request form, Honest Broker staff will provide an estimate as part of the feasibility review. On average, the process generally takes four to eight weeks — until the data is extracted to the investigator’s satisfaction. Often, there are other steps in the process — such as contracting — which can impact the overall time; we ask that you submit your request as early as possible.

This is highly dependent on the length of the trainees’ request queue. The process generally takes a shorter amount of time than a detailed data request, since only a list of MRNs is extracted. Often, there are other steps in the process — such as contracting — which can impact the overall time; we ask that you submit your request as early as possible.

After receiving data, who do I contact about properly securing the data?

What is involved in the contracting process?

There will need to be a signed Data Sharing Agreement (DSA) between Banner and the University of Arizona. Banner is working with UA to make this a Master Agreement with each project being an addendum, but until this is complete, a DSA will need to be executed for each request. The turnaround time for the DSA alone is estimated at three weeks.

How can I determine the status of my request?

For status updates, please contact us and include the PI name and project title.